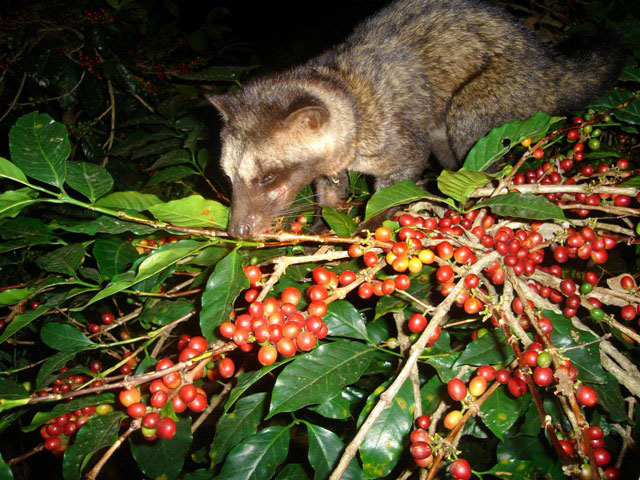 Civet cat coffee, known in its original language as Kopi Luwak, is the world’s most expensive coffee. This coffee is famous for its unique method of processing: passing through the digestion tract of the catlike civet. The civet cat eats ripe coffee cherries and, after it has digested the fruity pulp, excretes the coffee beans. Civet cat coffee took the international coffee market by storm and has gone from relatively unknown to a gold mine of specialty coffee. Since it was first discovered in the 19th century, kopi luwak has become both internationally acclaimed and reviled.

Kopi Luwak’s origins are rooted in the Dutch occupation of Indonesia. the Dutch East India Company began exporting coffee in the late 1600s and the Dutch colonies of South East Asia quickly became a major world exporter. To increase the amount of coffee they were able to export they forbade Javanese and Sumatran farmers from picking coffee to personally consume. According to legend, the farmers instead began combing through the droppings of the civet cat for undigested coffee beans. The farmers would dry, roast, and brew the beans, making a coffee with a uniquely smooth flavor that lacks the bitterness of most coffees.

When the Dutch colonists discovered how good the coffee was, demand for it began to rise. Thus Kopi Luwak first started its journey to becoming an expensive gourmet coffee. It was difficult for producers to keep up with demand due to having to scour coffee plantation areas for civet droppings and then clean and process the wild Kopi Luwak.  The low supply and high demand encouraged producers sell normal coffee and lie about its origins.  Lack of transparency in the Kopi Luwak trade temporarily killed the industry.

In 1991 Kopi Luwak reentered the specialty coffee scene. That was the year a man named Tony Wild as coffee director of Taylors of Harrogate, first brought a small amount of kopi luwak to the west. The repulsive charm of coffee from poop worked wonders with the press and public. The exotic coffee gained international fame and became a sought-after commodity.  Prices for this coffee can fetch up to  $200-400 per kilogram.

Kopi Luwak’s production method originates in Java, but other islands have adopted it over the years. The islands of Sumatra, Sulawesi, Java, Bali, and East Timor all process and export this coffee. In fact, the amount of people willing to buy over-priced novelty coffee is enough to fund the creation of multiple Kopi Luwak knockoffs starring various animals willing to ingest and excrete coffee beans. In other places, people have capitalized on the selling value of animal-processed coffees and developed their own versions. Elephant, bird, and monkey coffee are all being created and sold by people hoping to ride the market’s inclination towards coffee processed by animal digestion. China, India, Vietnam, Thailand, and many other countries are all selling their own take on this expensive coffee.

The surprising popularity of coffee taken from animal droppings can be explained by its taste. Kopi Luwak is praised for being smooth, sweet, and earthy. It has hints of caramel and chocolate and is often drunk without sugar or milk. It is said digestive enzymes of the civet remove some of the coffee’s bitterness and create a flavor that coffee connoisseurs with money to spare consider delicious.

In truth wild civet cats were free to sample the coffee berries as they wished and only ate the ripest, freshest berries. Workers forced to strip pick the berries, on the other hand, were far less exacting than a wild luwak. Kopi Luwak was also more effectively processed than standard methods back then. The civets’ digestive system gets rid of all of the cherry’s pulp much better than processing methods of the time were able to.

The specialty coffee industry today, with its exacting standards on plant health, cherry selection and processing methodology has equaled and surpassed any flavor variances from commodity coffee that Kopi Luwak originally possessed.

The State of the Industry

Despite any amazing taste Kopi Luwak may still possess the production process is cruelty to animals. Civet cats are omnivores who may feast on coffee in areas where the weather is colder and damp. They are nocturnal and solitary, not meant to be in close quarters with each other. Mass production of Kopi Luwak has led to caging and force feeding them diets of mostly coffee cherries. Unlike the coffee berry borer a civet cannot digest the caffeine in coffee beans. A poor, overcaffeinated diet combined with cruel conditions makes the animals stressed and unhealthy. A caged luwak used to produce Kopi Luwak rarely lives more than a couple of years.

Some few companies do actually get their coffee from wild civets, but that requires a large amount of effort to track down the creature’s droppings. Such a large amount of effort to gather a small amount of beans is what racks up Kopi Luwak’s prices to up to $3,200 per a kilo. Even companies that do not actually allow their civets to roam wild feel justified in charging such exorbitant amounts for their Kopi Luwak.

The Indonesian Ministry of Agriculture has done research in creating artificial Kopi Luwak. Muhammad Syakir, the head researcher, stated that they are artificially replicating the civet digestive process through fermentation. They have managed to isolate the civet’s probiotic microbes and use them to create a coffee with an identical flavor to classic Kopi Luwak. This discovery, however, came in 2016 and as of yet artificial Kopi Luwak is not on the market.

We do not sell kopi luwak at Bright Java. It goes against our goals of providing reliable, traceable, quality coffee with a positive social impact. The civet coffee industry is based on a manufactured delicacy, and most of what originally made it special The third and fourth wave coffee movements by focusing on picking ripe beans and effective processing methods has already replicated what made Kopi Luwak unique. Kopi Luwak fell out of favor because of fraud rife in the industry.  Many farmers claiming to sell Kopi luwak were in fact selling conventional coffee. This remains the case added with those who claim to sell only “wild” civet coffee.

Kopi Luwak is, frankly, a tragedy. People still pay outrageous prices for it, even despite the likelihood that the coffee they are buying was created through animal cruelty. If you want to get good coffee, simply buying specialty sourced beans is more likely to guarantee you a good cup, and you will be supporting an industry that doesn’t run on animal cruelty.